In this document we outline each phase of our work, so it would be easier for you to navigate through the stages of application development. 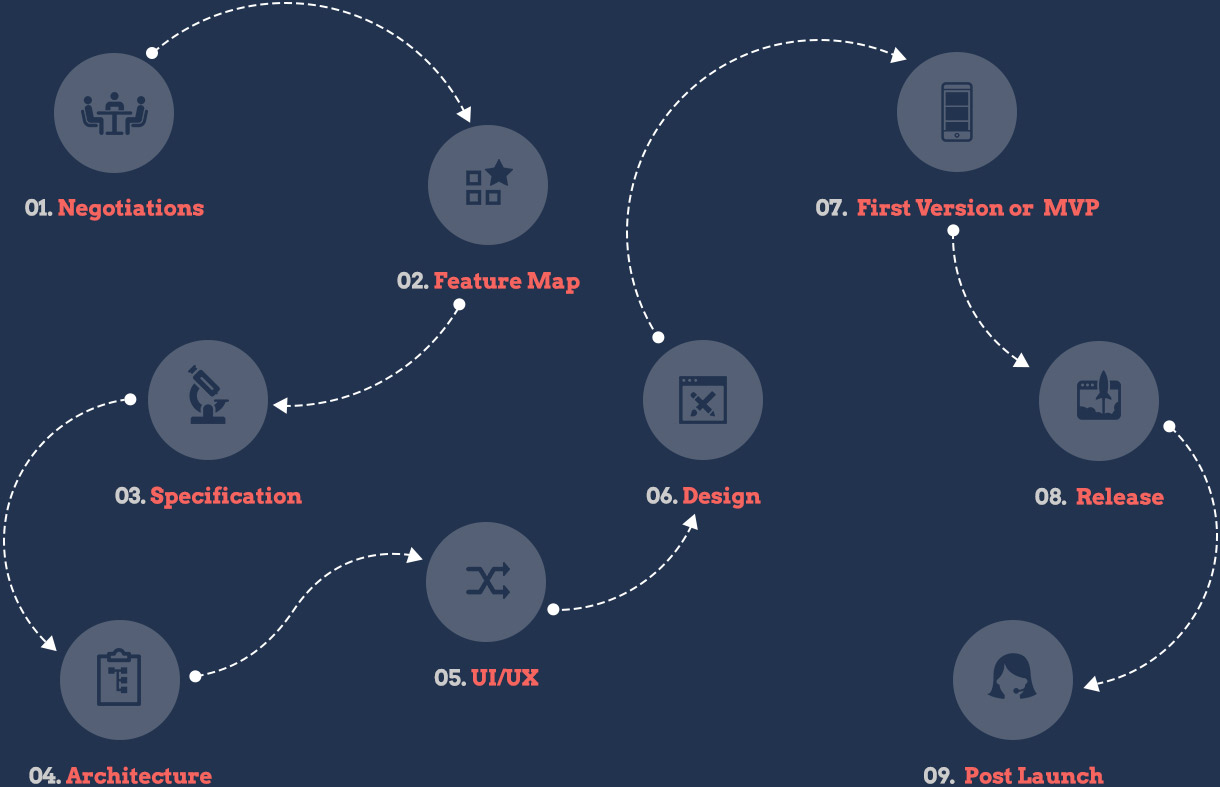 01.Negotiations
We start off with an interview that helps us understand your project idea, determine the user needs and business objectives the future app should fulfill.
the client

Main purpose and functionality of the app, additional features.

Prioritises functions and features of the app.

02.Feature Map
At this stage, we create a Feature Map, which sets project boundaries, functional specification, features and system constraints. We prioritise the implementation of the app functionality, which enables us to achieve the best results at minimum costs. Then we identify additional functions that will be implemented in the course of project development. A Feature Map is used throughout the development cycle for project evaluation, development scheduling and establishing goals.
The developer

Formalises specifications and presents them as a Feature Map.

Gives feedback on whether the Feature Map complies with his/her expectations.

Suggests additional functionality that has not been specified during the initial interview.

03.Analysis
At this stage, we research your competitors and analyse existing IT solutions. As a result, we create a detailed functional specification for the app, set out time frames, evaluate the cost of work and issue the contract.
The developer

Gives feedback on the specification.

04.Architecture
At the beginning, we create user personas, write user stories and develop application logic. Then we describe future iterations of the application development, evaluate the number of potential users and determine top-priority and low-priority features for software implementation. We invest our time and effort into quality assurance management and scalability of the product. Finally, we create a clickable mockup.
The developer

A black and white clickable mockup of the app.

Feedback on the mockup functionality - does it meet the expectations?

Questions and comments concerning its operation.

Approval of the design concept.

05.UI/UX
Next, we proceed to UI design/UX tests: implement all the features listed in the specification, define how the app will operate and how users will interact with it (in the context of all the personas from the collection of user scenarios), and define the buttons and functionality to be put on each screen.
The developer

Designs screen templates and functionality for each screen.

Creates a graphic map of the screen interaction.

Gives feedback on user scenarios and the graphic map.

06.Design
The wireframe of the graphic interface is fleshed out and extended by means of visual design. We design each screen of the future app in detail: main and additional screens, buttons, icons, tips, pop-ups and so on. We thoroughly test every interface solution that is created at this stage for usability. We use the result of these tests to improve the interface design.
The developer

Clickable prototype with all the screens and designs made in colour and detail with clickable buttons and fully integrated screens.

07.First Version of the app or an MVP
At this stage we write the code for the application. Our programmers build the first fully operational version of the product, (sometimes it’s an MVP). After we have conducted numerous manual and automated tests, we make modifications and, as a result, deliver the first version of the app or system to the client. We upload web apps and systems to a cloud hosting/server, iOS mobile apps to Apple Developer Account / Test Flight and Android apps to Google Developer Account / Test Flight.
The developer

Delivers the 1st version of the software (or MVP).

Gives feedback on the performance and functionality of the app or system.

08.App Store/Google Play Release or Deployment on a Client's Server
For mobile apps: Apple or Google experts run final performance tests. After the modifications (if needed), are introduced, the application is available for download in the App Store/Google Play and can be run by ordinary users.
The developer

Delivers the app to the client.

Gives feedback on the performance and functionality of the app or system.

Makes the app available for download from the App Store/Google Play.

For desktop apps: final tests are run by the client.
09.Post Launch Support
Based on the client’s suggestions for app functionality, we release updates to maximise the value of the application. We implement additional functionality, based on the Feature Map, providing more and more valuable features to users.
Let’s talk about
your product