In the Mobile everyone is waiting for the latest new releases to be available. Soon everyone will be able to get their hands on some amazing new devices, update their current OS or download fabulous apps that help to deal with day-to-day things in a more innovative and easy way.

Every owner of an Apple device is anxiously anticipating the arrival of iOS8 this September. Developers can take a glance at the future system right now and download the currently available beta5 version. There won’t be any new fascinating design solutions within iOS8 – but it will deliver a faster, simple, and more intuitive user experience. But this update is described by the app maker as one with a huge amount of new possibilities for iOS development professionals. For instance, they’ll be able to incorporate new image editing tools with the help of  PhotoKit and Camera API. And HealthKit will allow you to synchronize data gained by different fitness apps. Game developers will receive SpriteKit, and Metal - helpful means for building better new games with impressive graphics. Code masters will get a hold of broader export settings for easy content publication in social media or inter-application file exchange. Notifications will also be renewed, and there will be a broader variety of applications enabled to work with documents. Another new possibility is the creation of fully integrated custom keyboards for iOS. From this point on there will be no need for multiple passwords, as developers will have a chance to go through the identification process using
Touch ID. 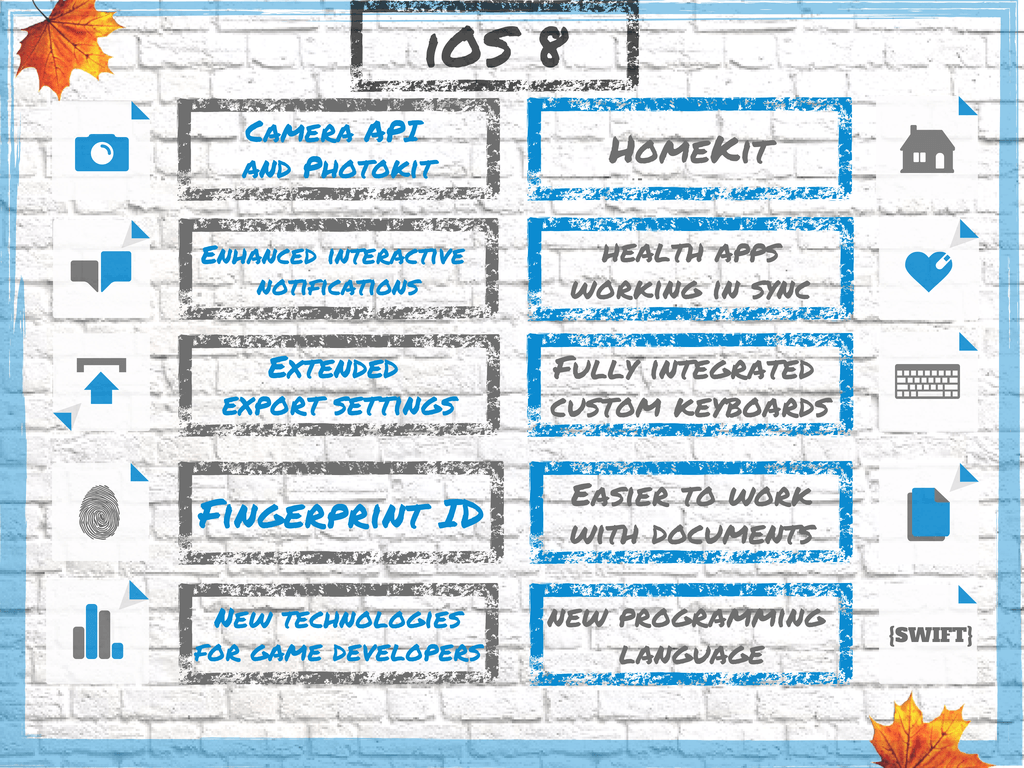 Google is keeping up and preparing a new version 4.5/5.0 of their OS with an “Android L.” working title. This release with new fascinating features and is going to be published this autumn as well. Developers can get a preview already, but the general public will have to wait for a bit. What changes is it going to bring to the table of Android app development? First of all, a totally fresh perspective brought by the concept called “Material Design” everyone is talking about. This is going to be a valuable and noticeable change for both users and developers. Then ART, which proved to be faster and more reliable, will replace Dalvik as a default Android runtime system. Notifications will get a significant transformation as well. Not only will they get a “makeover”, but from now on they will be displayed on the lock screen, synchronized across multiple devices, including Android Wear gadgets, and sorted by value. New APIs will help to enhance camera capabilities, convert PDF into a bitmap, improve testing and accessibility. Plus there is going to be more great fitness and health apps for Android, as developers will get the new Google Fit SDK, a preview of which is already up for grabs. Let’s not forget about Project Volta - a promising battery duration control tool. 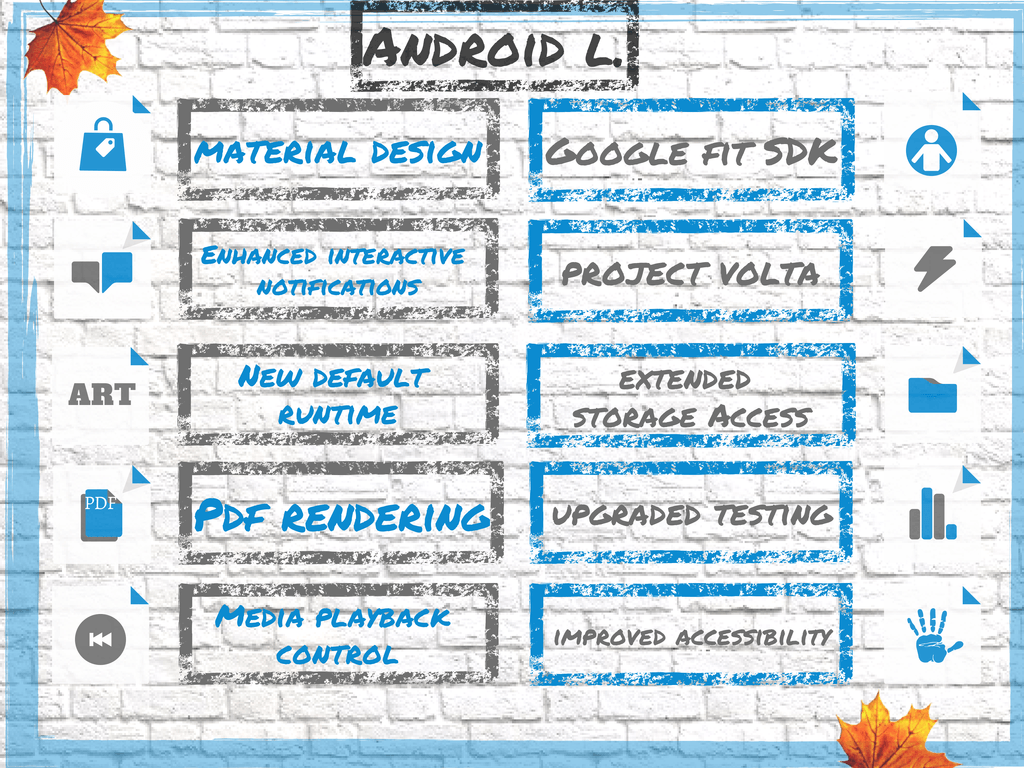 Even though Windows Phone is placed third in popularity, it has a difficult task of reaching the leaders who are way out in front. It comes as no surprise that there is an upcoming update from Microsoft as well. What new horizons will they unveil for Windows Phone app makers? Well, for starters, app packaging for publishing is going to be simplified. Implementing new features, like custom commands or improved drag-and-drop and navigation support, will be possible with the help of updated HTML, JavaScript, and XAML controls. Game developers are going to be especially pleased with the addition of DirectX 11.2, which is capable of giving a boost to the graphics quality. The new version will also include an enhanced file management - a list of supported libraries will be increased. Processing multimedia in Windows 8.1 will be a no-brainer for apps, created by means of both XAML and HTML. Overall, Microsoft promises new tools for app building, and promotion. And add to this list an set of templates and a higher level of security, achieved by including new authentication methods. With WinJS Scheduling API developers will be able to create better and more user - friendly
HTML5 apps. 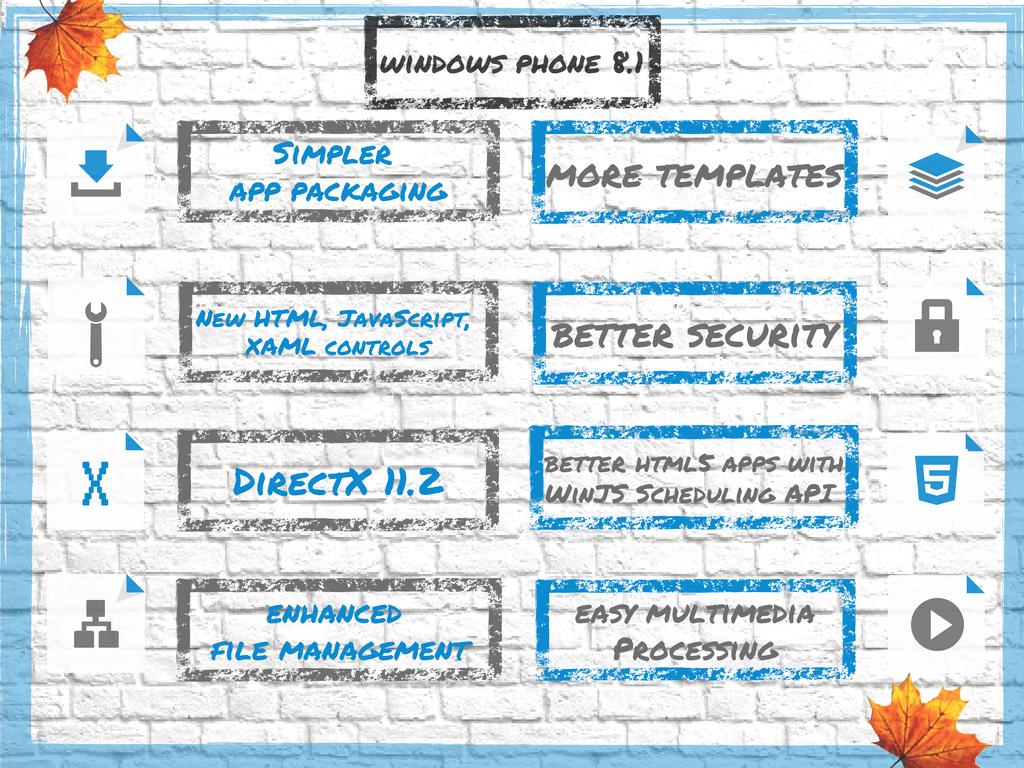 Will these updates prove themselves to be as great as they sound? Clearly, only time will tell. Nevertheless, we, the Magora Team is always glad to get new opportunities to build even better apps for OUR clients. We’re looking forward to upgrading the design, implementing new features and creating fantastic user experiences with it!