IT on Australian Railways

Australia is located in the Southern hemisphere, stretching 3180 km north to south and 4000 km east to west. This continent is unique in that it has long been isolated from other continents and as a result has preserved many animal species that cannot be found anywhere else on the planet such as the koala, kangaroo, platypus and short-beaked echidna. The Australian coat of arms fully reflects the unique character of Australian wildlife, yet wildlife is not the only peculiarity of this vast country; its railway system, first developed in the colonial era, is no less exciting.

The Australian continent belongs to a single country, the Commonwealth of Australia, with a population of 21.5 milion people. Australia’s railway coverage is dense in coastal areas and very sparse in the inland territories. By 1946 the Australian railway network consisted of 44,900 km of track, but by 1990 total mileage had decreased to 39,700. Today there is approximately 32,800 km of track, more than 2500 of which is electrified. There are two electrification systems in use: 1500 V DC and 25 kV AC. Rail penetration in Australia is one of the lowest in the world. The network uses all kinds of rails from wooden ones to steel and cast iron with a meter of track weighing from 24 to 60 kg depending on the railway line.

Over 42% of cargo in Australia is transported by rail with approximately half of it on its 2400 km of private railways. The largest private railway network is located in Western Australia and is used for transfer of iron ore. Passenger lines in turn serve around 650 mln people each year. 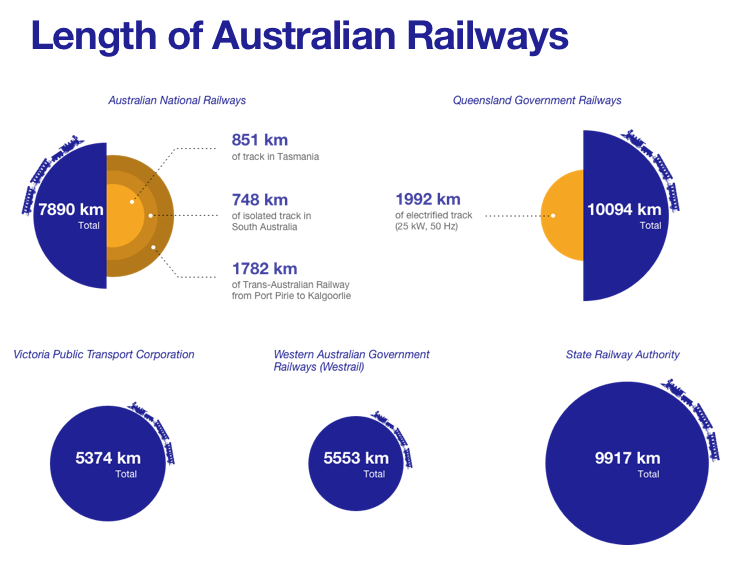 The Australian railway system is served by five major companies: 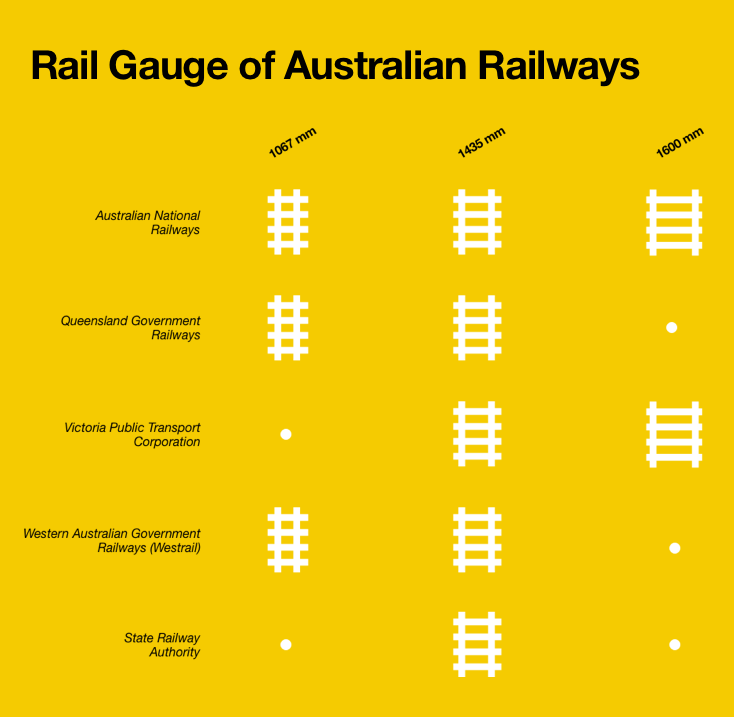 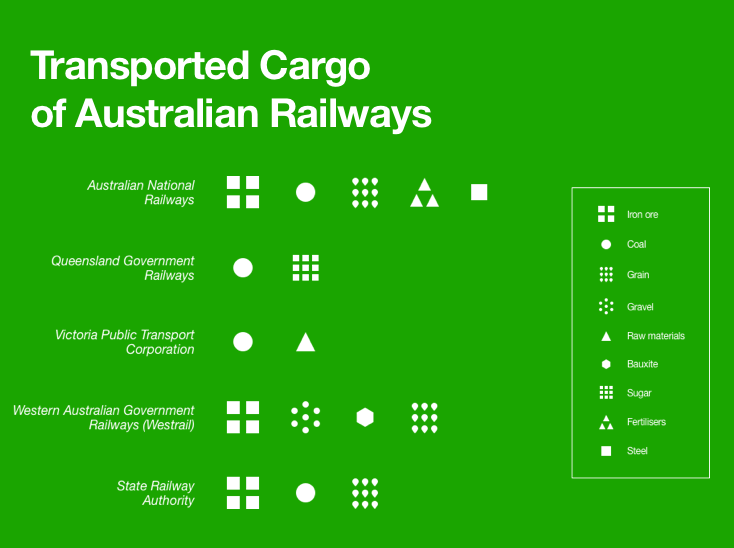 The railways has always been one of the best modes of long-distance transportation for heavy cargo. However, in the case of Australian railway system this ability is very much reduced because of the differences in rail gauge - the width between the two rails - which varies from state to state. Because the railways in each state are owned by the state government, officials choose to invest in local production rather than rail gauge unification and national freight services.

Another major issue is the lack of electric rail traction standards. Early colonial governments didn’t give much thought to the nationwide interests of Australia, so when the first railway networks were electrified in 1919, no uniform standards were adopted.

According to a number of reports on the condition of and problems facing Australian national transport (Revitalising Rail. The private sector solution, Tracking Australia. An inquiry into the role of rail in the national transport network and Progress in Rail Reform) the most pressing issues in need of modernisation and reform are:

While some of the issues can only be solved via government participation and introduction of new laws regarding nationwide standards, most problems can be fixed through the implementation of internet-based technologies for railway maintenance, planning and servicing. 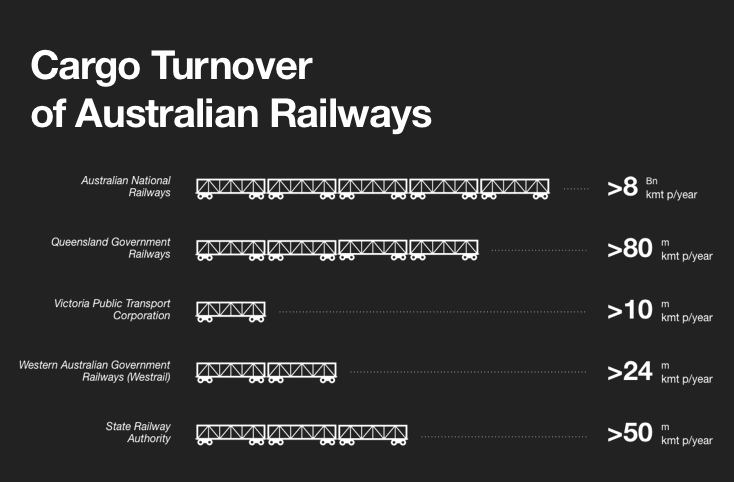 How Technology Can Help Transform the Australian Railways: Efficient Solutions for Railway Transportation and Logistics

Tracking train routes, ensuring safety and maintaining proper rail condition - these challenges cannot be addressed with traditional software based on machine-to-machine communication. They require more advanced and elaborate solutions that connect trains and tracks to computer programs that process data gathered from these physical objects and environments. These elaborate solutions are known collectively as the Internet of Things (IoT).

IoT is just one of the many definitions that describe the complex interactions between software and hardware, devices and services, systems and sensors not limited to machine-to-machine communication. IoT embraces a variety of applications, protocols and domains. There is a whole list of terms used in relation to the same concept: the Industrial Internet of Things (IIoT), Internet of Everything (IoE) and other variants, describing the same mechanisms with varying degrees of overlap. In this article, we’ll stick with IoT as the most universal and widely used term.

IoT allows road and rail transportation to use high-tech sensors, machine learning technologies, Big Data analytics, cloud computing and other high-end digital solutions to collect and process information from the immediate surroundings, vehicles, roads and other sources, which is later analysed to boost efficiency, improve transport management and expand the scope of services provided.

What Problems Related to Rail Transport in Australia Could Technology Solve?

Many modern railway systems use complex monitoring technologies for better railway maintenance. For example, railway companies in the European Union utilise GSM for signaling. However, the opportunities provided by intelligent IoT systems go far beyond signalling and could be used to solve a wide range of problems: 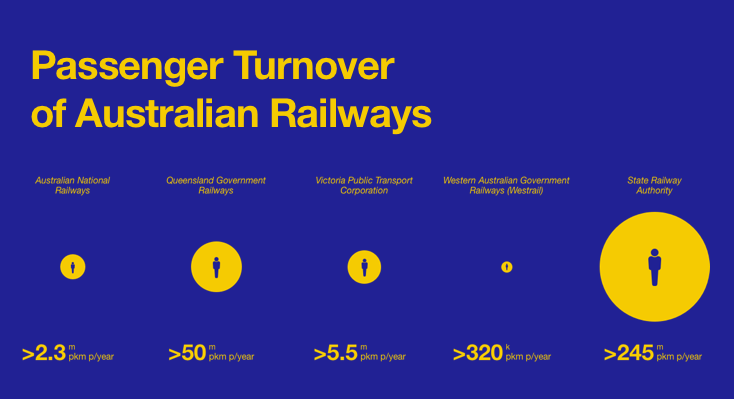 IoT can also significantly improve signalling. The concept behind such a solution is to introduce in-cab signalling systems that would automatically control speed and movement of all trains passing along certain sections of track and easily communicate this information to every other train in the area. Intelligent signalling can save up to 40% of costs associated with traditional lineside signals, allowing more trains onto the track, minimising delays, improving passenger capacity and preventing accidents that can arise from human error.

Beyond detecting faults and preventing accidents, technology can help make passenger journeys more comfortable. Smart ticket gates at stations and CCTV (closed-circuit television) cameras can monitor the number of passengers and their movement from carriage to carriage to track which seats are taken and which are vacant. A smartphone app connected to the system can collect this information in real time and tell passengers boarding later on which carriage to move to in order to find a seat, and where to exit the train most quickly at the destination station.

Information technology can help optimise train loading and unloading. A smart system equipped with high-tech scanners can be used to recognise optical characters placed on freight cars and inform workers on their content, weight and measurements, as well as help quickly find containers that need to be unloaded. Such solutions significantly reduce train downtime and increase the speed of freight shipping.

Railways are a core mode of freight and passenger transport. They are cost effective due to reduced energy consumption and as a result are environmentally friendly, generating less pollution than roads, cargo ships or aircraft. Adopting smart railway systems based on IoT technologies is the most efficient way to solve Australia’s cargo transportation, and even save the contintent’s unique fauna in the process.